The Tree Farm Relay took place this past weekend at Lakeshore Park in Novi, MI. Some much needed rain fell the night before the event making the conditions for the early riders a bit slick in spots, especially across the wooden bridges, but once a couple laps were in the traction was great. Bryan Deal once again was the first on our four man team to battle his way through the Le Mans style start and get us in a good position. The lap two transition is always hectic due to the amount of riders coming through at the same time attempting to pass the lei between teammates. The typical fumbles, tip overs and crashes occur at this point but Bryan & Brian Brown made a clean hand-off. Brian rode a mistake-free lap while Brandon warmed up and waited anxiously to take off. Another good lei pass and Brandon was soon out of sight. I was the anchor and was watching the clock and estimating when I would need to be ready. I pedaled in circles in the grass around the EZ-UP’s that were strewn across the infield of the park. And then I asked about the time. And then I did more laps. And then I asked about the time. And I waited thinking to myself it seemed like an exceptionally long time for Brandon to complete his lap. He finally came through and I rolled slowly waiting for the hand-off like we had discussed. I heard Brandon blurt out something about a mechanical but I was focused on moving forward so I waved to Chrissy & Marley as I rolled past our pit and off into the woods. I found that most of the people I would encounter were courteous to give me room to go by. My HR was higher than the zone I normally like to race in so I tried to manage that on a trail that doesn’t allow for much of a break and has a tendency to waste a lot of energy because of the constant switchbacks and obstacles. I finished my lap without any issues but I can’t say the same for Brandon. His chain broke about mid-way through his lap and soon after recovering from that he caught a tree root with his pedal and his momentum threw him over the bars and flat on his back. That’s his story. I think he had six too many shots at the tiki station and took a dirt nap on the backside of the crater. 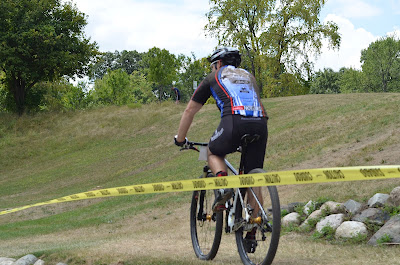