I have a lumberjack 100 entry for sale.
Brian@precisionmtb.com

Sent from my Samsung Epic™ 4G
Posted by PrecisionMTB.com at 2:52 AM No comments:


I had a few general ideas of the terrain going into this race but wasn't really certain what to expect. Yeah, it starts and ends at a ski hill so it should have been obvious to me some climbing was involved. I knew we'd race across some of the Vasa Pathway, a little Iceman terrain, and some high speed two-track too. None of this really sunk in until the morning of the event when I walked across the parking lot and found myself at the ski lodge overlooking the start/ finish line and the tents that were setup down below. 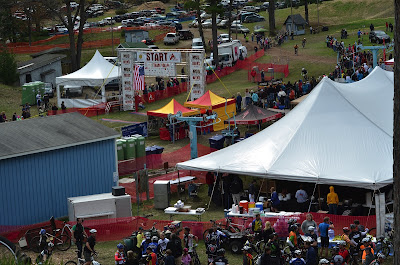 It was 8:50am and my always shorter than intentional pre-race warm-up ride was complete and I sat in staging listening to the announcer make the cattle calls for the rider waves. I found myself suddenly realizing that my current position was in the first wave of racers 3 rows back of the starting line surrounded by a respectable crew that all removed their helmets for the national anthem. My first experience being led out by 4-stroke dirt bikes was pretty cool to say the least; I could still hear them 4-5 miles into the race which was pretty amazing given the first climb is appropriately named Horsepower Hill. No doubt this hill seperated the 35 riders in my group and every wave thereafter. No time for recovery as we hit the pavement through a subdivision and began drafting. Back into the woods and there were already a few groups of riders split up and I hung off the back of two teammates working together. It wasn't long before I found myself on familiar ground riding the Vasa Pathway, in and out of marked trail and barely ridden singletrack, most of which I had explored before. These two would make some time on the flats and rollers while I would play catch-up on the climbs. We eventually collected another rider that was in front of us. I decided to do a bit of work and move toward the front of the group and set pace. Seems I surged too quickly and gapped them going into another section of singletrack and never looked back.


Within a couple miles I could catch glimpses of the next group in front of me. It very likely took me a couple more miles to catch them and it worked to my benefit when the group collectively blew a turn and one rider fell back. I sat back five or so bike lengths and watched as these two worked with and against each other. I didn't know it at the time but they were in the 19-29 age group. They finally realized I was lurking and it wasn't long before they seemed to get a bit nervous and change their strategy, so they dropped in line behind me. I tried to wave them by after some time but neither one wanted to be in front. As we came through the back of Timber Ridge campground off they went as my legs felt spent. Not wanting to waste all the effort I had put in I made some time back as we headed through Vasa again. Only a couple race miles were left and as we moved into the subdivision on our return to Mt. Holiday I made a little time back through the sweeping blacktop corners as the neighbors watched on sipping their cocktails and blaring mariachi music. Going down horsepower hill was a better experience but this is also where two-way race traffic exists for a couple hundred yards. I got stuck behind someone that had likely been in the 10-mile race going up a short sandy incline that robbed all my momentum and put a gap between me and the other two guys I was racing with that I never closed. With a really cool slalom gate arranged down the ski hill it was a quick skim across the mud put for the hecklers lined across the fence at the finish. I got 5th place in Expert 30-39 (first down state guy in my class) and my 1:26.07 time was good for somewhere around 15th overall. Great race and atmosphere. I'd like to thank my wife/ pit crew and wish her a happy 6th anniversary. Could have done without the rain but at least it held off until the racing was over as we celebrated with some TC friends after the race. 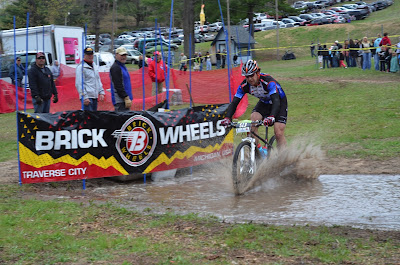 "Where's Wheeler?" asked Chrissy shortly after I finished. I spent countless hours at the beer tent, standing in line at each tap strewn across the area, frequently visiting Scotties Potties and texting a few people to get his number. I never located him, not even through my pint glass which I found the bottom of a few times. Happy Cinco De Mayo!

I want to start by saying that I could not be happier with my new Stan's wheels.  I was excited to pick them up so I could see how the gold Hope hubs and gold nipples were going to look.  Jimmie Colflesh built a solid set of wheels for me.  I got them and couldn't wait to slap on a set of rotors and some Stan's Sealant so I could see how they rolled.

I was imediately impressed with how easy my tires inflated with Stan's rims.  I struggled in the past with inflating my Fast Track tires on my DT hoops.  No more white nuckles with the Stan's.  Both tires inflated instantly and sealed without leaks.

Yankee Springs would be my first ride on these.  I can't believe what a difference a good set of wheels makes.  They feel solid underneath me as I roll over tree roots and navigate rocky sections.  My bike is noticeably lighter and the wheels spin up quicker than the stock DT set.  Overall I am so happy with the Stan's hoops that I hate to take them off!!

Yankee TT is the first race of the MMBA Championship Point Series.  This year the registration was caped at 700.  I raced Sport 35-39 which had 40 entries.  This was large field compared to other CPS events.  Since the race is about 2.5 hours from home I decided to stay in Saugatuck, Mi.  Lisa and I were able to get a last minute room at a B&B.   The drive to Yankee Springs was only 45 minutes and I was able to get a good breakfast and great night sleep.  We got to Yankee about and hour before my start time so I could get ready with my 2012 Team Kit.

My race began at 12:40 and I was off to a decent start.  I settled into a decent pace and seemed to have plenty of energy toward the end of the lap.  My goal was to finish with a better time than 2010 but I did not have an expectation in terms of a finishing position.  I wanted to use the race to gage my fitness and see where everyone else was.  The field was fast this year since the March weather allowed people to get out and ride early.  My finish was 23/40 with a time of 57:34.  I'm happy with the fact that my time was almost 4 minutes faster than 2012.

Brandon
Posted by Brandon Bailey at 11:03 AM No comments: