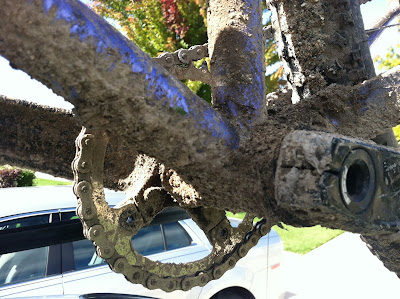 I love riding my bike. I particularly enjoy riding my singlespeed mountain bike on trails, dirt roads, rail trails and paved roads. The Grampian Challenge was an inaugural event that I read about earlier this year. It billed itself as offering the chance to race on all the terrain listed above. This made it particularly attractive to me.

When I looked at the course itself, I realized it covered one of my favorite running routes in southeast Michigan. Indian Lake Road and Drahner Road offer some of the best hills in the area. This spring I ran a couple 20 milers here preparing for my marathon in Steamboat Springs, Colorado.

But the weather was looking bad. Actually it was a full on horror show. Rain, wind, cold. I went to bed Friday and decided I would make a game day decision Saturday morning. When I awoke it wasn't raining so I decided I would go. Wind was forecast to be between 20-30 mph. Hills and a strong headwind when heading north. This was gonna be tough.

When I arrived at Addison Oaks registration went well. A pint glass was given to each participant with "Grampian Challenge" stamped on it. Nice touch. At 10:01 AM they lined us up and sent us out. And so it began. Some double track at Addison Oaks. Mud was there but not horrible. Next up Drahner Road and a big climb up. Legs still being fresh I powered up it easily. We made our way over to some dirt trails I have never ridden before. A bit more mud, I hit a couple corners a bit too hard and had to get on the brakes quickly.

Eventually we made our way out and onto Indian Lake Road. More rolling hills. And then we made a right hand turn onto a road that linked back over to Drahner. This was a long grinding hill that really put a hurt on me. My legs were feeling it and I was only halfway there. By the time we got to the top I was in need of a breather and welcomed the downhill section that followed. From here the course was a bit of a blur. Rolling hills, more climbing, and then a respite on the Polly Ann rail trail. Then some soupy dirt roads with more hills. At one point I thought I had a flat front tire and actually brought my front wheel up and was relived when it hit the dirt with no give. The mud was that bad.

Towards the end we hit a "ski hill" that I had heard some people talk about before the race. I had no idea what they were talking about as there is no ski-worthy hills in this region. While the hill was worthless for skiing, it was something to behold when your legs are fried and your pushing 61 gear inches on a singlespeed. I rode up as far as I could only to dismount and start pushing. And pushing. Once we hit the top, the ride down was sweet. The next thing I remember was finding myself back on Drahner Road and climbing up another long, grinding hill. My legs were protesting, my breathing labored but I was picking off some riders which made me feel a bit better. Grind - grind and finally the top. Back down and on our way to Addison Oaks. They finished the race on a long section of singletrack there and it was good fun. Except that my legs were gassed. And I had tapped my water bottle. And I was STARVING but had on winter gloves so I could not manage to eat at all. Still I managed to reel in an pass a couple people on cross bikes. The finish line as a welcome site.

When I crossed it I was greeted by JimmieC who was changed into clean clothes, smiling, and eating a banana. I was coated in mud, hungry, thirsty and grateful to be done. I was tempted to grab the half eaten banana from Jimmie's hand. That was tough, way tougher than I thought it would be. I think this race has great potential and really enjoyed it. If you are looking for a new race to try next year, give this one some consideration. Being so close to home makes it a nice bonus for me.

Results
Posted by Jim at 9:18 PM No comments: