The blog has been a little dead as of late. Lots of racing going on but, some fun training too.

Roger, Lee, Jim, Andy S., Jason, Brandon and I from the team made it out for a couple of fun filled laps at IRLA this morning. Lee managed to stay upright for most part but, Roger had an unfortunate run in with a rider who moved to the side of the trail to let our group pass and then cut directly behind me and in front of him resulting is both of them going down. Jimmy who we know from LA Fitness and BTT basically tacoed a wheel but, some how it survived lap two. Although it had a heck of a wobble. Our first lap started off and remained pretty quick. Luckily things settled down for most of the second lap. It was also fun to have 3 singlespeeds in the group. Man is Roger fast out there. Especially, when you run out of gear and watch him pedal away in the big ring in the flats.

Great weather and it felt really good to get out on the bike. I am definitely not 100% after being sick all week but, the weather was just too great to pass up the chance to get out for a ride.

A quick snapshot of the group from my phone. 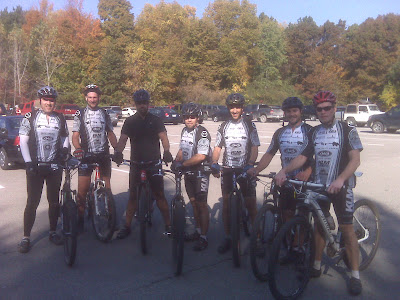 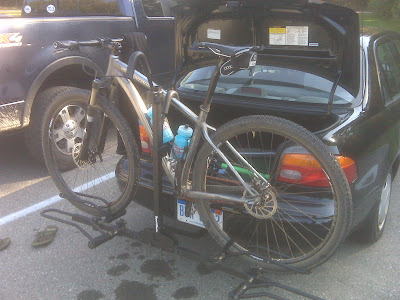 Jimmy and Roger surveying the damage to Jimmy's front wheel. I think the count was 16 spokes with little to no tension on them. 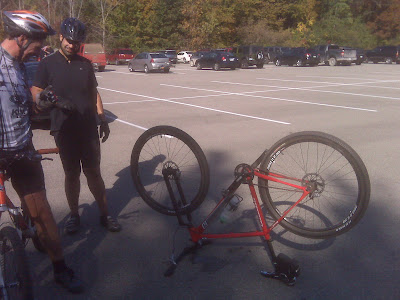 Posted by Just CallMe Wheeler at 6:28 PM No comments: