Hine Park Time Trial
First ever road race. I figured this would be a good introduction to road racing since there would be an extremely low likelihood of crashing. This format of racing is simple but tough. Probably the best way to judge cycling fitness short of doing a VO2max test. You basically race the clock and attempt to reel in a couple of riders and get passed by a couple (at least in my experience).
Result 15/30 Time 34:07 (3mins 16 seconds off first place pace) 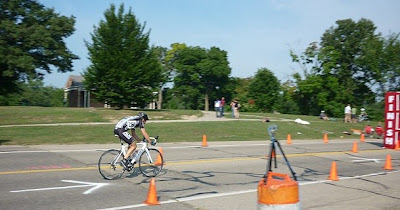 Ore to Shore
My first time in the UP of Michigan was to run this 48 mile mountain bike race. I heard that a lot of roadies liked to race this course since it was not real technical. I also heard some people call this race "Sand to Sand" due to the large amounts of sand on the course.

Race day JohnS, AndyE, Jimmy and I did a warmup ride through the streets of Negaunee. I guess we got carried away and rode too long, we lined up almost dead last. Fortunately Jimmy is big and strong, the first two miles were on the road. The three of us formed a draft line behind our horse and passed LOADS of people. About a half mile into the dirt I made my move and broke away from the gang. I continued to pass riders left, right, in between, and completely off the trail. This was a fair amount of work, especially so early in the race. But I knew eventually I would be with riders of similar ability. Unfortunately this did not happen before the course ran over some very climbable hills that EVERYONE was walking. Not what you want to see on a singlespeed.

After ~12 miles I was surrounded with riders of a more reasonable ability level. This was a huge help. At some point before mile 20 we rode through a section of trail that was underwater. Its hard for me to say how deep but I think it was close to the level of my bottom bracket. I actually laughed at this point since I would never ride through such nonsense except in a race. My feet were drenched, the lenses on my shades were trashed from the rider ahead of me spraying me, and I could not see the end of the water pit. I was happy when this part ended although the cool water felt wonderful on this hot day.

I finally ran down teammate Melissa shortly after "Misery Hill". And when I say ran down, I mean I was running my bike up a hill and passed her riding her rig. It was great to see a familiar face out there, I was going to try and ride a bit with her but this section was tough. I decided I better focus on safely getting myself through and did not see her again on the course.

My next big concern was that I was going through my water bottles much faster than I had anticipated. I made the decision that I would burn through all my fluid and make a pit-stop at the next aid station and fill up. When I came across the aid station, volunteers were out in force with cups of water and sports drink. I weaved in between a couple of them and stopped under the tent. A woman ran up to me and I asked if I could please fill up my bottles. She grabbed the bottles from my hands and said to wait there. What service! I then noticed some cut up orange slices, they looked good so I ate one. One became two and then my bottles were back in my possession. Damn - these oranges were awesome. I decided at the finish I would eat my fill of these tasty things.

So onward we went, many miles on the streets. The geared folk would pass me on the flats and downhills, I would reel em in on the hills. It became comical after a time because it was the same people I would keep trading positions with. I actually took to trying to draft them on the flats but it was a big effort. Hearing that there were more hills up ahead from spectators simply became words of encouragement to me at this point.

The rest of the race passed by in a blur, there was a great singletrack section that was a blast. I had 4 or 5 guys lined up behind me at one point. When I asked if they wanted to pass they said, "NO, you're carrying the best lines we have seen all day". A rare compliment on my technical skills but I'll take it.

Sometime later it is almost time to finish. I am working pretty hard with a couple miles to go when this big dude passes me on a singlespeed. I make an attempt to go with him but the tank is running low. Not enough explosive strength left to fend off this guy - not even enough to try and hang with him. I finally cross the finish and hear a, "Let's go Senska" and am all confused. Who the hell do I know in the UP? Everyone I know should be on the course still? Then I see them and it's BTTers Dearborn Don and JayB with big smiles on their faces. Very cool, and then it was over.

Lessons learned: I need to be able to push more gear inches and not start so far back to improve my time at this event. The gear inches is tough; there are lots of steep hills here but there seem to be even more flats and downhills where I would be less likely to spin out and perhaps make up more time.