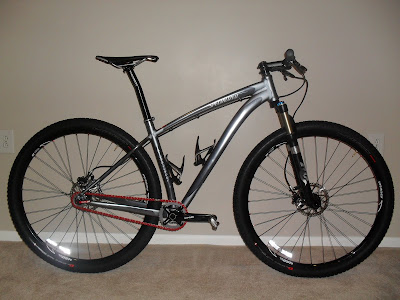 After a two week wait in my basement collecting dust while we worked to sell our house, the new MTB is finally built up and ready. Welcome the latest addition to the family. It's a 2010 Specialized Stumpjumper 29er SS. And yes, the reflectors are staying. At least for its debut. Check out that profile. That's one sexy lady. 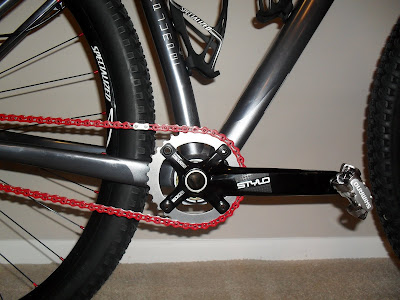 Inevitable customization has already begun. You may have already spotted that Thomson seat post in the previous picture. Check out the red KMC BMX chain wrapped around the stock 32 tooth chainring on the 180mm Stylo cranks. This was originally intended for the Motobecane's single speed conversion but, wouldn't work with the tensioner I bought. It's a nice addition to the red highlights already present on the bike. 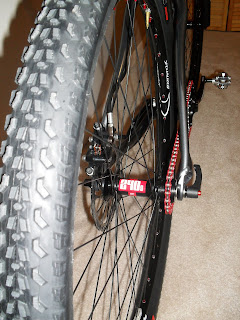 Out back, the stock 20 tooth gear has been dumped for a 17 tooth Surly and mounted up on the stock DT Swiss 240s hub. Making the gearing just under 2:1 and hopefully just right for all that climbing on June 19th at the Lumberjack. The tubes have been pulled and after a failed attempt with the stock tape job, tapped with genuine Stans NoTubes tape, filled with sealant, inflated and are now holding air just fine.
This thing is sex on wheels. She's tipping the scales at 19.4 lbs as she sits. That's basically 4.5lbs lighter than the Motobecane sans gears. More updates are certainly in her future. Likely some Ergon grips and cutting down the extra wide bars.
Many thanks to Jimmie Colflesh for the help putting the finishing touches on it and the team sponsor KLM.
Posted by Just CallMe Wheeler at 9:14 AM