As many of you know, Tom, Bryan and I from the team recently returned from a long weekend of riding in Tennessee and North Carolina. The trip was fantastic and consisted of a difficult climb and an intense, white knuckled descent on an attempt to reach Clingmans Dome in Gatlinburg, TN. An attempt which was thwarted by weather (rain and snow) and a road closure due to construction. A scenic ride into the clouds up closed roads on the Blueridge Parkway in Asheville, NC. Then wrapped up with a wicked ascent and fun filled up descent on the steep, winding roads surrounding Cold Mountain. We put in approx. 125 miles over our three days of adventures in the mountains. No small feet considering much of that was spent on 7+ degree climbs and over many pedal mashing hours. We could have asked for better weather the first two days but, our final day on our ride around Cold Mountain melted any complaints away. The rest of the trip consisted of laughter filled drives, great southern food and hospitality, relaxing evenings recovering in local micro breweries and tales of the day told around the fire. In the end we all made it home safely with our only mishaps being a torn tire, one flat, some seriously stretched chains and cables, extremely worn brake pads and a speedometer stuck at 120mph in Tom's Envoy.

(Blueridge Parkway Climb to the Clouds)

Posted by Just CallMe Wheeler at 9:36 AM No comments: 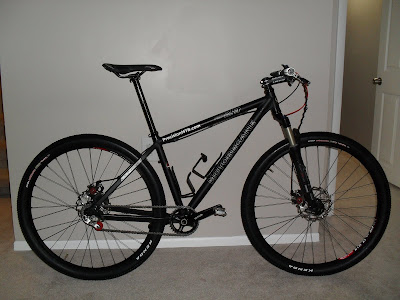 No more cassette and rear derailleur for the time being. Plus, shiny new SB8 tires. I am not happy with the conversion and I haven't even ridden with it. However, I am determined to try this single speed thing. To spare the group, I saved all of the lengthy whining for my own blog.
Posted by Just CallMe Wheeler at 1:53 PM 1 comment:

A handful of PrecisionMTB team members braved the weather this morning and gambled successfully that the relentless, Michigan, Spring rain would break for the race. The race turned out to be a real success. I am not sure what the number of race participants were but, the sea of green easily stretched 2 miles of the course along Michigan Avenue. The vibe from crowd before and during the race was fantastic. Green shirts, beads, hats, skorts and clovers galore. Irish music filled the air. The after race celebrations turned out be just as high spirited and successful as the race. It was great to see so many people enjoying themselves in D.
Results:
Adam Wheeler - 20th Overall - 4th 30-34 Age Group
Bryan Deal - 431th Overall - 80th 30-34 Age Group
Jim Senska - 449th Overall - 58th 35-39 Age Group

Posted by Just CallMe Wheeler at 9:56 PM No comments:

***Times subject to change due to weather and/or lack of interest. Check the team blog for updates.

For those with access, feel free to add to this posting with additional Westside, Lower & Upper Eastside riding plans.

FYI: Posting this direct from my email to the blog. Then hoping the routing Brian set up will notify all of the team members of the post. Should be pretty slick. Think near real-time race and event postings throughout the season.

I need some kind of a cool, inspirational slogan to stick at the end of my postings. Like "Keep the rubber side down", "Born to Ride", etc. Guess I'll work on that for the next post.

Hotmail: Powerful Free email with security by Microsoft. Get it now.
Posted by Just CallMe Wheeler at 3:33 PM 2 comments:

Here is our 2010 kit. Please be sure to watch for the guys and gals wearing them at all of the races. 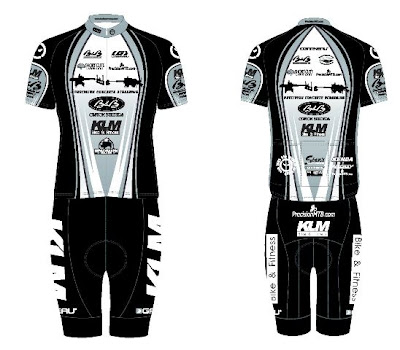 Posted by PrecisionMTB.com at 5:30 PM No comments:

Since a certain teammate of mine provides me with a count down to Lumberjack each time we talk, I figured I'd make it official.

Why a countdown to the Lumberjack? Why not Barry Roubaix, Yankee or Boyne? Cause it’s the Big MF. It’s more than a race. It’s not only a test of one’s fitness but, one’s ability to survive. Survive? Seems a little dramatic, huh?. You haven’t heard about anyone dying at the Lumberjack. I am pretty sure that’s because nearly 1/3 of its entrants fail to complete the test of mental and physical fortitude each year instead of collapsing on the course. I’ve been told it has the highest dropout percentage of most, if not all, of the 100 mile endurance races held across the county. Some say it’s because most of the 100 mile races are point to point, with little chance to drop out. That may be part of it but, I believe there is more to it.

I too nearly fell at the hands of the beast in 2009. I barely resisted the urge to curl up in a fold-up chair and call it a day after the third lap. Without the persistence of a teammate, I would have done just that. I was not prepared. I came prepared with a decent base of physical fitness but, I had no plan for nutrition or hydration and I stubbornly refused to give into common sense and come prepared with the right equipment. I breezed through the first ½ of the race. I felt great, I was passing people effortlessly, powering up climbs, forcing myself to drink my sports drinks to prevent dehydration and eat pop tarts each lap to ensure I had fuel to continue. However, lap three was a different story. My stomach started rejecting the sports drink and pop tarts that I was force feeding myself earlier in the race. My stubborn decision to stick with my rigid fork had taken its toll on my shoulders and neck. My head was pounding and it felt like it was going to snap off my neck each time I descended a now choppy and rutted downhill. I became delirious about ½ way through the 3rd lap and on a completely flat and clear section of single track, grabbed a whole handful of my front brake. This prompted an endo directly onto my neck and shoulders which already had me wincing in pain. Luckily the incident and jarred me back to reality. I pedaled back to the start/finish at what seemed like a pace I could maintain walking, sat in a fold-up chair, debated whether I should give up or try to continue to fight back my urge to vomit and climb back on my bike and attempt to finish. I sat there and watched the clock and made deals with myself like “3 more minutes and then you go” until those deals became “2 more minutes and if you don’t feel better, you’re done.” I knew I was looking grim based on the looks I was getting from the folks in the tent beside me. I am sure they could see the pain and discomfort on my face. Approximately 15 minutes passed before my teammate Ray arrived. It felt like I had only sat there for a few seconds. I was still feeling terrible. He relentlessly urged me out of my chair and got me back on the bike again. I staggered up the first sandy climb and Ray was gone. The rest of the 4th lap is a blur. I remember grazing at the last support tent and meeting up with my former high school teammate. I am sure he could see the misery in my eyes. He offered to ride in with me to the finish. An offer that on any other day would have only been answered in a challenge to a race to the finish. However, this day was different. I was just trying to survive. I accepted and we rode in together. That day I promised myself that I’d never attempt another Lumberjack.

So, back to the topic at hand. Why the countdown to the Lumberjack? Because I’ve never been one to “just finish” a race. A former US running stand out Ryan Shay use to say that “excuses are for lack of preparation.” This year I want to come to Lumberjack prepared and finish the race I know I can ride. Not be beaten down to considering a finish a success as I did last year.
Posted by Just CallMe Wheeler at 5:02 PM No comments: 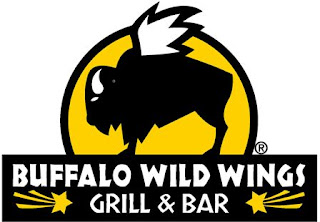 We would like to give a warm welcome to our newest sponsor. Our local franchise of Buffalo Wild Wings will be supporting the PrecisinMTB.com crew for the 2010 season. Look for our riders a the Westland, Dearborn, Howell , and Ypsilanti locations.
Posted by PrecisionMTB.com at 3:43 PM No comments: