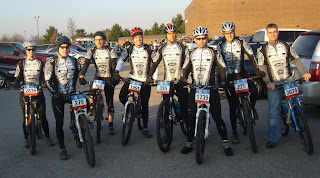 The Iceman 2009 Race was a blast. There were over 4,000 racers all converged on downtown Kalkaska last Saturday.

This was an interesting year for me from a training standpoint. Last year's Iceman was my first race ever. This year I had a full season of racing under my belt. I think last year I was in better shape and had trained harder for Iceman. This year my racing performance peaked in July and then life got kind of busy and riding took a second chair for the balance of the summer. It felt a bit like "show up and ride" this year.

Last year was 2:07 vs. 2:09 this year. The 2009 course was 1 mile longer than 2008 so I figure roughly the same time as last year. The course was really fast this year and I felt the 2x1 gear ratio cost me time on the flats but am not sure a taller gear would have netted a faster time as the hills would have been really tough. I think next year a carbon frame 1x3 would be the fast ticket. I was in wave 10 and had many of my single speed younger friends in wave 8 just ahead. Many friends were in various waves all over the entry field.

At around the 3 mile mark the rider immediately in front of me wiped out in a major sand pit and I promptly went over the bars on top of him. No damage and we were back on the course quickly. The rest of the way was fairly uneventful with a bit of a challenge on the nutrition side. I used honey this year and the consistency made it a bit hard to get out of the flask quickly. The finish this year had many more vendors and activity than last year including local food vendors. We stayed and watched the pro's finish. The promoters had a large digital leader board and that was fun to see the names of teammates pop up.

It was a great year of racing for Team Precision MTB, thanks to Brian and Jimmy for everything this year. Jeff hosted a killer party in a one room school house just blocks from the finish with killer homemade Chili and Chicken Noodle soup, thanks Jeff & family.

I can't wait for next season and the winter rides that are soon to come.